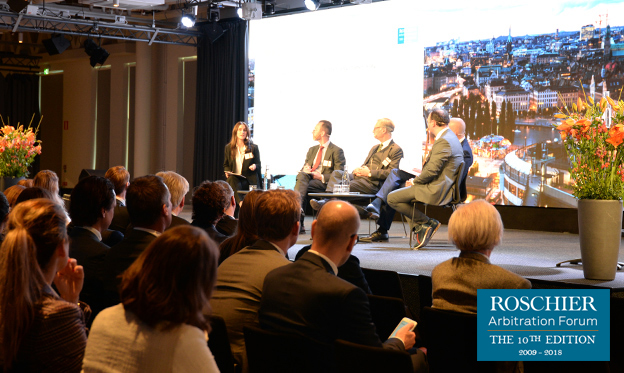 We celebrated the 10th edition of our annual international arbitration conference, the Roschier Arbitration Forum (RAF), on Monday 7 May in Stockholm. This year’s topic was Energy Disputes and the main focus of the event was current issues and future trends in the energy markets, in particular related to dispute resolution.

The number of disputes in the energy sectors continue to grow and the issues have become ever more diverse and complex in the wake of market deregulation, which formed the backdrop to this year’s conference theme. As previously, the experience of large companies as well as other relevant stakeholders in the Nordic region was at the forefront of our discussion.

Inspired by the theme, three international panels composed of leading arbitration practitioners and experienced in-house counsel discussed key questions for a successful arbitration strategy taking into account the particular factors relevant to the energy sectors. Preceding the panels, a presentation on central facts and news related to the energy markets was given by Laura Huomo (Roschier) and Eva Storskrubb (Roschier).

The first panel, comprising Sondre Dyrland (Wiersholm), Patrick Hébréard (CEG Europe), Sergei Komlev (Gazprom Export), and Eva Storskrubb (Roschier), which was moderated by Rikard Wikström-Hermansen (Roschier), focused on gas price disputes and raised issues such as the role of the arbitral tribunal and its mandate and the role of expert witnesses, and whether “hot-tubbing” or experts being appointed by the tribunal works. In addition, the challenges of understanding the gas markets and the relevant legal impact of market change were discussed. Finally, the panellists considered the future content of long-term supply contracts and the nature of potential future price-review disputes.

The second panel, consisting of Jonas Hallberg (National Board of Trade), Kaj Hobér (Uppsala University, 3 Verulam Buildings), Michael Polkinghorne (White & Case), and Shirin Saif (Roschier), which was moderated by Johan Sidklev (Roschier), addressed investor-state disputes under the Energy Charter Treaty. The discussion ranged from a more general perspective on the need for an investment protection regime and the extent to which it has had an impact on trade, to a more specific discussion about the investment protection standards under the Energy Charter Treaty. Finally, the panel attempted to look into a crystal ball to determine the shape and form investment treaty arbitration will take in the future.

The last panel, comprising Anna K. Christiernsson (Stockholm Exergi), Wilhelm Guthwert (Fennovoima), and Kristiina Vuori (Independent gas market specialist), which was moderated by Gisela Knuts (Roschier), concentrated on commercial disputes and risks in varied energy markets, our guest speakers having significant experience from the gas, nuclear and district heating energy markets. Among other things, the panel reflected on the fact that a dispute does not have to be a zero-sum game and that it is very important to deal with disputes early on in complex projects, such as those relating to the construction of large plants or significant energy transporting pipelines.

The seminar as a whole attracted over 100 attendees from 12 different jurisdictions. After the seminar, a closing reception was held at Roschier’s office. The guests mingled and enjoyed a great view of Stockholm. We are very grateful to our guest speakers and so pleased that so many people participated in the event and the closing reception. We are already looking forward to next year!