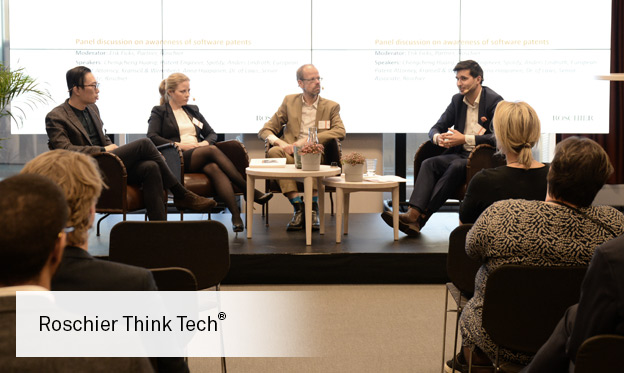 Roschier had the pleasure to host a Think Tech® event focusing on software awareness on 19 March 2019 in Stockholm. This was the second time the event was arranged. Partner Björn Heigis opened the seminar by introducing Sissela Nutley,  Ph.D. and brain scientist at Karolinska Institute, who gave a key note speech on the topic “Digitalization on the brain – drain or gain?”. The event continued with panel discussions on software patents and the relation of software and data in the healthcare sector.

Partner Erik Ficks moderated the first panel on software patents where Spotify’s patent engineer Chengcheng Huang, European patent attorney Anders Lindroth at Kransell & Wennborg as well as Anna Haapanen, LL.D and Senior Associate at Roschier, discussed availability of patent protection for disruptive technologies such as artificial intelligence, machine learning algorithms and blockchain technologies as well as various incentives for seeking patent protection considering that software may also be protected under copyrights or as trade secrets. The panel addressed the question from the perspective of both owned patent rights in software assets as well as third party patent rights and freedom to operate.  The panel further debated technology license transactions and the licensing of patents and/or copyrights in software assets under proprietary and open source licensing models as well as best practices for the management of IP rights in connection with commercial use of open source software. The key take from the discussion was to “know your code” and make informed decisions when incorporating third party code (whether proprietary or open source) and when distributing, contributing or licensing the code to third parties. 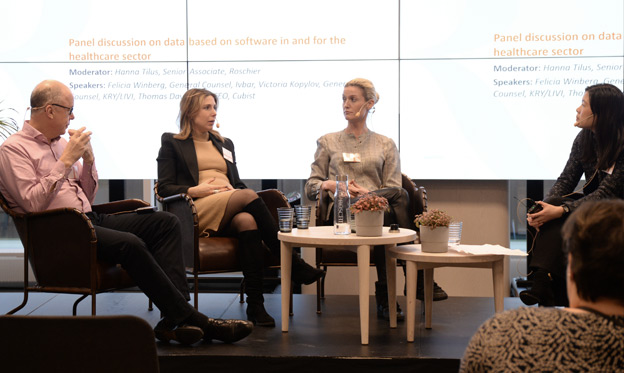 The second panel, moderated by Senior Associate Hanna Tilus, addressed data based software in and for the healthcare sector. The panel was joined by Victoria Kopylov, General Counsel at Kry,  Felicia Winberg, General Counsel at Ivbar Institute, and Thomas Davidsson, CEO at Cubist IT. The starting point for the discussion was that the population on the planet is rapidly increasing and also getting older than ever before, which makes it  crucial to generate new innovations in order to improve the quality and efficiency of healthcare. The panelists discussed the urgent need for better, more efficient healthcare and thereto related challenges with the decentralized healthcare structure in Sweden, consisting of 21 counties (Sw. Landsting) with almost completely different IT environments. They concluded that it is obvious that the counties will need support and tools to be able to meet the increased healthcare needs. The panel also agreed that there lies a substantial amount of work ahead to actually update the IT environments to meet these needs. The final topic of the panel was the general data protection regulation (GDPR). All panelists strongly agreed that privacy is a crucial prerequisite to be able to operate and being trustworthy on the market.